OFF ME NUT FORUM

You are not connected. Please login or register 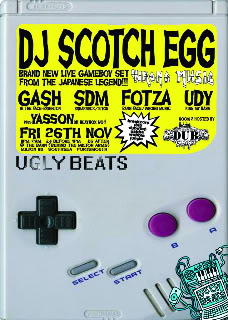 This man needs little introduction, one of John Peel's favourite electronic music producers, a legend in many people's heads and the most entertaining of performers you are likely to see, Shigeru Ishihara, DJ Scotch Egg, is the Japanese pioneer of the chiptune and gabba genres. His live shows more often than not see him stomping around with his hoodie up while rockin’ out with one of his many game boys, only putting it down to scream distorted obscenities down a megaphone at the crowd before joining them on the dancefloor for the occasional mashpit. Come, witness, you will not be disappointed!

We also welcome GASH from Brighton's In The Face crew. After many years of producing breakcore mashup tracks, Gash has recently found the sweet spot, whopping out a bunch of wonky dubstep wobblers guaranteed to get you shrugging yo shoulders like nobodies bizniz.

Joining him we have local legend SDM, resident at the city's leading dnb and dubstep nights and no stranger to the darkside. SDM will be bringing a fine selection of the more evil and twisted side of dnb so open your mind and ears and let your senses get battered, good and proper!

Latest addition to the bill is ALTON8, a local dj who likes to keep it old skool. Since 1994 Lee Alton, aka Alton8, has kept it true to his jungle roots and can deliver a fine ol' mix, believe. Making his Ugly Beats debut, prepare for guaranteed back to back amen bangers!

Last but not least we welcome YASSON, a South Coast beatboxer with one of the most original styles around who recently came 4th at the Vauxhall UK beatbox championships. His routines often incorporate the pan flute and didgeridoo and cover every genre you could think of from jazz to hip hop to dubstep, dnb and gabba.

Holding down the second room is the 21 Century Dubclash crew, Tom Mayhem, Joel O'Bierne and Sidekick MC. Stacks of bass from jungle to dubstep to breakbeat. You are in safe hands from start to finish, blardy get involved!!

DJ Scotch Egg in action with a gameboy orchestra...
https://www.youtube.com/watch?v=0iNR6V7F_0Q